Sometimes it feels like life is a series of retracted “I’ll never…” statements, but that’s not necessarily a bad thing. Almost two years ago ago I held Annie and Romeo on my lap for the last time and said a tearful, difficult, but humane farewell to each of them.

Their parting wasn’t unexpected although as anyone who has ever had pets can attest to, it still wasn’t easy.

For a variety of reasons I swore up and down that I would never have another pet.

Then one day Christian showed me a few pictures of his girlfriend’s cats while telling me stories about their adorable antics and how low maintenance they are compared to dogs. Knowing my feelings about getting another pet, he was careful not to interject too many obvious references to his desire to have a cat become part of our home.

Coincidentally, I’d also been reading about the benefits of owning a pet as it relates to emotional health and feelings of well-being. There’s something about caring for a living being that helps to reduce feelings of loneliness and depression.

Having a pet forces one to get up in the morning rather than bury themselves under the covers and worry about everything under the sun. It’s also almost impossible not to smile and maybe even laugh out loud when you see a cat hanging out in a cardboard box

or a tiny basket. 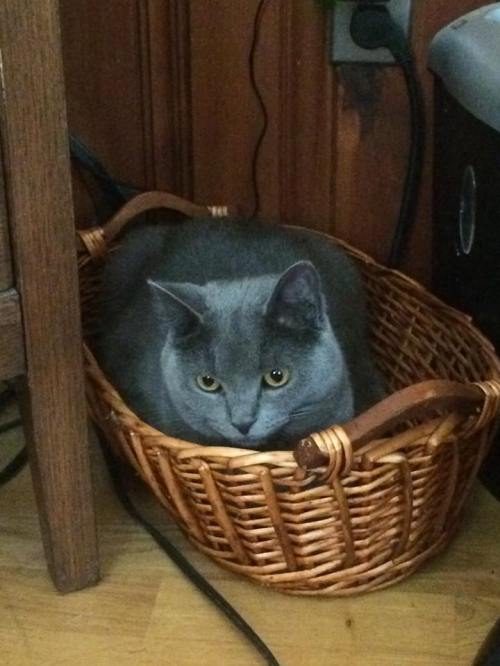 There’s practically nothing better than laughter to lighten a mood, and I have to admit that cats are funny. 🙂

The more I read, the more appealing the idea of having a cat became. Although I don’t think there’s really such a thing as a hypoallergenic cat, I wanted to find a breed that is as allergy friendly as possible. Surprisingly there are 10 breeds that are considered to be good options for pet owners who have friends and family members with allergies.

After two clicks I fell in love with a picture of a Russian Blue, not only do they produce less of the stuff that people are allergic to, they are one of the prettiest breeds I’ve ever seen.

One thing led to another and a single Google search led me to Cats Bridge to Rescue, a local non-profit animal shelter for cats and kittens. Lo and behold the third cat on the adoption page was a perfect match. A 1 year old female Russian Blue named Mia. 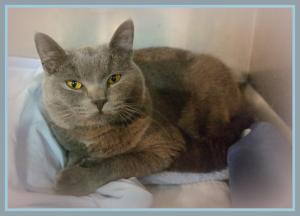 I sent Christian a text:

“What would you think about a cat named Mia?”

Four days later we became the proud and happy owners of a new cat. She quickly made herself at home and began exploring the whole house within just a few hours after arriving home.

She’s been home for 4 months and true to her description on the shelter’s website Mia is very friendly and quite social. She’s not cuddly, but does seem to prefer to be in the same room as Christian or I are hanging out in. During the day we spend a lot of time in the den, 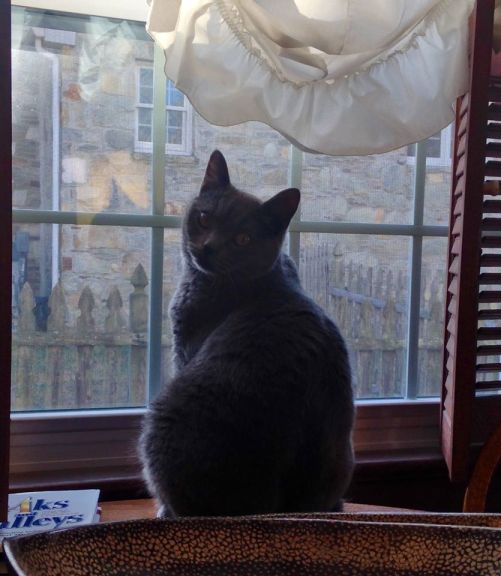 and now that it’s nice outside, we like to hang out on the porch.

In the evening she’s my art buddy.

Her favorite toys are plastic bottle caps – one cap can keep both of us occupied for a long time. It’s hysterical to watch her pounce, capture, and bat the bottle cap around with her paws -> watch here.

I never thought I’d have another pet, let alone a cat, but I’m really enjoying having Mia in my life. Proof positive that the old saying “never say never” is one worth heeding.