The piano has always been a part of my life. Some of my earliest memories are of Grandma Marion playing carols in the crowded living room after a traditional Christmas dinner of Swedish meatballs, lefsa, lutefisk and rømmegrøt. (Yes, I’m a bit Norwegian).

Surrounded by aunts, uncles and cousins, the 24th of December was full of warmth, even on the coldest of winter nights in North Dakota. I do believe my love of music, especially the piano is rooted in large part with memories of her. My piano is part of her legacy.

I took lessons as a child and through my teenage years. If memory serves me correctly, I made weekly trips to my instructor’s house until I graduated from high school. I don’t ever remember dreading practicing or going to the weekly lesson. I also don’t remember looking forward to it.

Thankfully, my parents were wiser than me, and when my grandmother passed away, they used part of my dad’s inheritance to purchase a piano for me. It seemed like the right thing to do, although I never dreamt it would mean that I’d ever touch the keyboard again.

They bought me a beautiful upright, made by Yamaha – which according to my new piano tuner is one of the best. 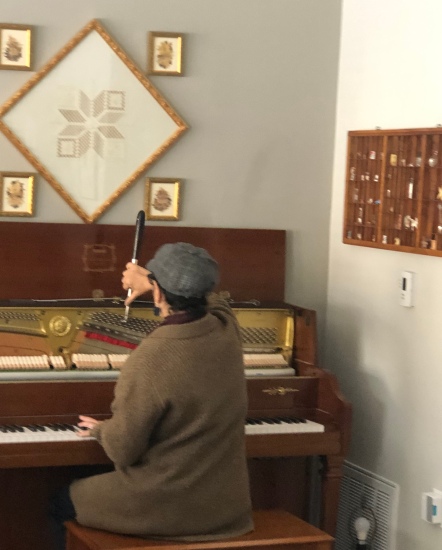 The details are fuzzy, but soon after the purchase, I arranged lessons for myself and my three children. We all advanced at different speeds, and I’m not sure why we stopped our Saturday lessons, but by the time we did I had made my way through most of John Thompson’s fourth-grade series. For anyone familiar with the series, you’ll understand why I’m proud of this accomplishment.

My piano and I were separated for three years when I moved from Nebraska to Pennsylvania.  We were reunited thanks to the generosity of friends, but in spite of the reunion, it went unplayed for the better part of eleven years, that is, until recently.

Inspiration comes at the strangest times and often-times in the most unexpected ways. My new boss and I were talking about music, and I happened to mention that I had a piano.

“I used to, but I’m beyond rusty and my piano is horribly out of tune.”

He said, “Why don’t you get it tuned and start playing again?”

“Hmmm, that’s a good question, maybe I’ll look into it.”

His comment and the rest of the conversation motivated me to get serious about at least getting my piano back in tune after 11 years of traveling back and forth across the country.

Finding a piano tuner was much easier than finding a teacher – but after a few weeks of Googling, I found both and I couldn’t be happier with both discoveries.

Anna or A. Ajemian is a second generation piano tuner – she mastered the art of piano tuning against her father’s advice. He wanted her to pursue a “respectable job” for a woman. In other words, he thought she should find a “nice office job.” Thank goodness she ignored his advice!

Three weeks after having my piano tuned I had my first lesson with Mark. He welcomed me warmly and I felt at home as I took my place on the bench in front of the obviously well played and loved white upright against the main wall in his studio.

We talked and I explained that I had taken lessons for many years and the focus of my study had been on classical and jazz. I shared that I’m at a point in my life that I just want to have fun with music, and while I want to learn and be challenged I don’t feel a need to graduate from John Thompson’s Fifth (and last) grade level book.

He said “I know exactly what you need,” and flipped through a book of sheet music intended for someone who plays the ukulele. I was dumbfounded and wondered for a moment whether or not I had made the right choice for a teacher; ukulele sheet music only has a single note melody line – no chords, no bass clef. I was perplexed and had no idea how this was going to work out.

After settling on a song, he asked me, “Do you know how to chord?”

I responded by playing the middle C chord with some authority. He beamed, “Yes that’s it! Now, do you know what the inversion of that chord is?”

I looked at him blankly. He went on to explain how chord inversions are different ways to play the same chord, each position is called a different inversion depending on what the bass note is. He guided me through some basic chord formations, and I felt both comfortable and challenged. It was clear to me then, I had most definitely found the right teacher.

It was scheduled to be a 30-minute lesson, so at 8:35, five minutes over the scheduled time, I fully expected him to give me my homework, not to say, “Start from the top again and incorporate the chord work we just talked about.”

I did, certainly not flawlessly (not even close), but I did my best and it was fun.

At 9:05 he wrapped up the lesson and gave me my homework assignment, which includes a lot of work around root and inversion cords while working a Bob Dylan classic, “Blowing in the Wind.”

As we were wrapping up, he said, “Your lessons won’t usually be this long, they’ll be in the neighborhood of 30 minutes or slightly more. But tonight I was inspired to keep going because of how quickly you were catching on.

It’s clear you’ve had excellent musical training and have talent. Because of your background, you made more progress in 30 minutes than some students make in months. This is going to be fun!”

I’m going to enjoy learning something completely different from playing classical music. It’s also cool to know that all of the years of playing and practicing songs from the various grade levels of “John Thompson’s Modern Course for the Piano” paid off.

I’ve had great fun practicing this week, even if my cat doesn’t seem to appreciate it.

I’m excited to see where this new adventure takes me!

If you’ve made it this far, here’s a sound bite from my first week of practice – it’s far from perfect, but it makes me smile nonetheless.

For the second time in my life, I’m proof positive that piano lessons are not just for kids. I also won’t be surprised if my next lesson includes a lot of focus on the importance of finger position on the keyboard. I have a feeling it would have made some of the chord transitions much smoother.

All in all, it’s so much fun to explore something familiar, but yet brand new.

4 thoughts on “Silly Rabbit, Piano Lessons are for Grown-Ups!”