“Batten down the hatches” is a phrase that makes me think of movies like “A Perfect Storm” or “Pirates of the Caribbean.” I never thought it would be something I would hear as part of a conversation while waiting in line at the pharmacy, let alone that it would be relevant to me.

I knew there was a hurricane on the way, and that we were likely to get some extra rain over the next few days, but I didn’t realize the potential severity of it until I received a text message from my landlord.

JM: u been watching weather forecast?

JM: have a peep at the weather channel for Yardley.

I’m embarrassed to admit that it took me nearly 30 minutes to find the local weather station; I’ve hardly turned it off since.

It turns out that Irene is the size of Europe, and although she’s ‘only’ a category one hurricane, she has already caused the evacuation of over two million people from North Carolina to New England. An unprecedented 400,000 people in New York City have been displaced from their homes to shelters varying from the comfort of a friend or family home to a cot in a high school gymnasium. Eleven states have declared a state of emergency, including Pennsylvania.

In the Philadelphia area, we’re expected to experience winds of fifty to seventy miles per hour and six to nine inches of rain within twenty-four hours.

With that in mind, it seemed wise to ‘batten down the hatches,’ although I did have to take a moment to find out where the phrase originated.

Its broad definition is “prepare for trouble” and refers to the securing of property. The specific origin is nautical and relates to preparing a ship for bad weather. A batten is a strip of wood that is used to hold something in place; a hatch refers to an opening, as in the deck of a ship. A ship’s crew would cover the hatches with a tarp and secure them into place with wooden strips (batten) to protect the ship during severe storms.

Thank goodness for my landlord who guided me step by step through the process of preparing for Irene. I never would have thought to put the gas grill or the trash cans on the enclosed back porch or to dig a small trench outside the front door to help the excess water drain down the hill instead of pooling higher and higher in front of the house.

The trip to the grocery store was surreal, there were more people buying groceries than the day before Thanksgiving and Christmas combined and the level of frenzy matched if not exceeded either holiday. We stocked up on essentials like bottled water, ginger ale, and food. The bad news was they had the same number of flashlights for sale as all the other stores in town, zero, but the good news was that my neighbor had a spare one to loan me.

We’re settled in for the storm and as well prepared as we can be, up to and including the relocation of the mini-fridge from the ‘man cave’ to the den. Now all we can do is wait and see what happens.

I wonder if you can take pictures during 50 mile per hour winds without getting blown away. 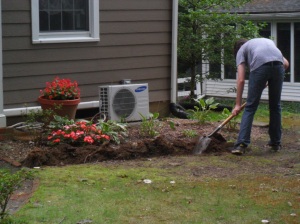 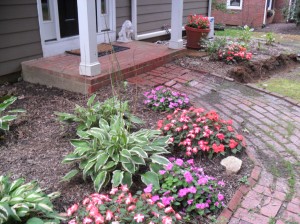 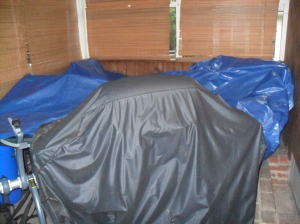 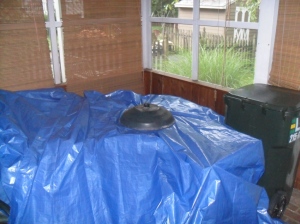 11 thoughts on “Batten Down the Hatches”