Of all of the lessons I’ve learned over the past few years, this one has been the most difficult. Not so much from a standpoint of turning to others for guidance, but more about accepting help from others and paying attention to the voice inside of me that knows which direction is right for me.

It can be hard to trust that we’re going in the right direction when things don’t seem like they’re not going “according to plan.” Maybe the problem is that we’re following the wrong voice.

Becoming comfortable with the phrase, “I need help,” has been a challenge for me, being honest it still is. I equated the need to ask for help with an admittance of failure; failure to be able to “rise to the occasion” or that I’d had a lapse in judgment and made a mistake. I readily owned up to and learned from mistakes in my work life, but rarely in my personal life.

As a woman who wanted both a professional career and to be a mom, I fell into a huge superwoman syndrome and spent the better part of my adult life trying to “prove” I could do it all. I thought everyone around me had certain expectations and perceptions about who I was and what they thought success looked like for me. As the primary and often-times sole income earner I felt tremendous pressure to perform. My home life was unhappy, so I used work as an excuse to cover up my sadness.

It was a mixed up time in my life and I now realize that during those years I spent my time believing I was living up to expectations that I thought other people had of me, but really I was hiding from life and ignoring reality. I made a lot of poor choices during that time, some of which still affect my life today.

Back then, the mere thought of confessing even half of what was going on and taking responsibility for the poor choices and decisions I made nearly crippled me with anxiety.  My fears spanned the gambit and included everything from being yelled at and perceived as stupid to being rejected by everyone who knew me.

I was only fooling myself

The reality is – the person I was the most dishonest with was me.  I thought I could and should make things right on my own.  I lied to myself and pretended that there was a way out of the mess I was in and that no one would ever have to know the ugly truth.

Little did I know that my pain and struggling was obvious and everyone around me was praying that I would wake up and ask for help. We’ve all been there, watching someone we love struggle and at a loss for how to let them know that they do not have to bear their burdens alone and that asking for help isn’t a sign of weakness, it’s a sign of strength and of trust.

What I know now is that three things were missing from my life during that time. One is that I was afraid to ask for help and I was unwilling to be honest about what was going on in my life. Two is that I wasn’t listening to my inner voice. Three is that I spent every day doubting the future and without faith that I was truly supported by the universe and everything I need is always provided. 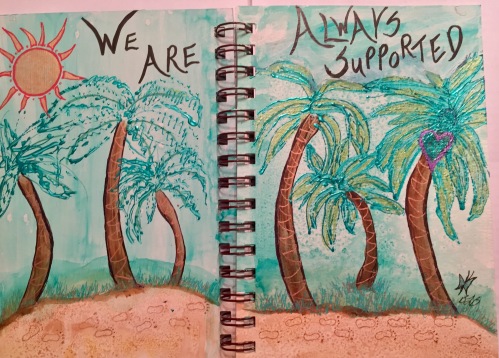 Asking for help does sometimes mean admitting you’ve made a mistake and need some help to right the ship. But it also means you have enough confidence in yourself to ask, accept, be grateful for, and do the same in return.

Listening to the voice inside you, the one who really knows what’s right for you might be even more difficult than learning how to ask for help. It gets crowded out by the voice of societal expectations and our perceptions of what we think others expect from us.

Listening to, and following that voice, sometimes requires that we say no to opportunities that don’t “feel” right, even if it will bring in some extra cash or look good on a resume.

Accepting guidance is something that comes from inside us, believing we are on the right path, rolling with and adapting to change, having faith and asking for help when we need it.