A few weeks ago my friend Kathy asked if I could help her demonstrate the art of making paper for the Princeton Arts Council.  I had no idea what to expect and didn’t even think to ask.  She needed the help, I was available – the “what” I’d be doing didn’t really matter, plus I knew it involved making paper so I figured there couldn’t be a down side.

We met at Kathy’s house and I followed her to Princeton.  My biggest fear was that I’d have to parallel park on a narrow neighborhood street.  Much to my chagrin I don’t know how to parallel park.  I must have at one point in time because I have a driver’s license, but to this day I’ll walk a mile or more before attempting to maneuver my car between two others.

I found a spot on Lytle Street and took a picture of the street sign just in case the street names escaped me later in the day.

I wandered around with my camera while Kathy and a couple of volunteers set up the tent.  While snapping pictures, the mission became clear.  Kathy had invited me to help her at the Princeton Arts Council Fall Open House.

Oscar, a volunteer and incredibly nice guy, helped me hang samples of hand made paper along the tent for show and tell.  I was as excited and nervous as a first grader to put my artwork on display for everyone to see. 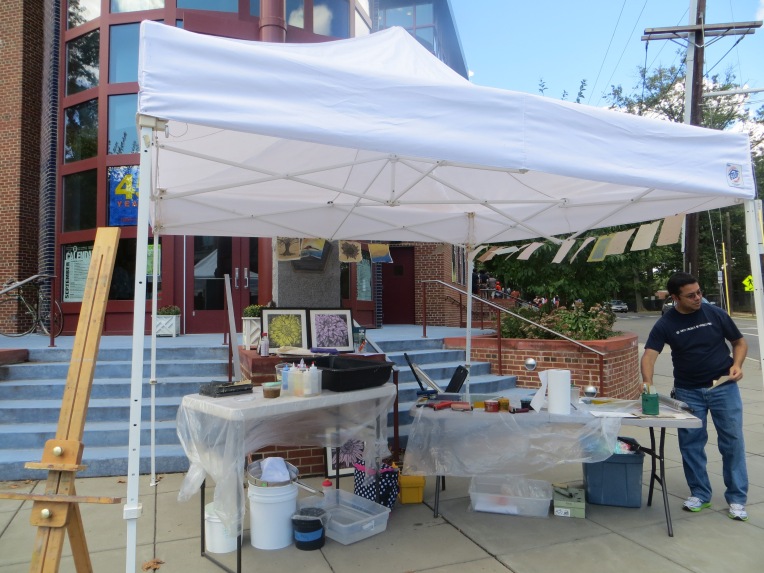 Before I knew it we were both surrounded by people and I was chattering about how to make paper like I’d been doing it all my life.  It was great fun to encourage people to touch the raw material and watch their eyes light up when they saw the end result.

There were mixed reactions to the pulp in it’s first stage, it’s wet and feels sort of mushy but strong.  Mostly people wondered how the the stringy stuff in the bucket would become a piece of paper.

The pulp is soft and feathery after it’s suspended in the water and it really is a lot like panning for gold to pick up the tiny wet fibers and drain off the excess water.

It’s fun to add pressed petals or leaves for a special touch.

The best part of the day was seeing the eyes of both kids and adults light up when they watched the piece of paper magically release from the screen.

At the end of each demo, I shared completed pieces of paper so people could feel how strong the paper is even though it has the texture of parchment.  I was embarrassed but delighted at how people raved it.   I felt like some sort of celebrity when a few people asked if they could take pictures of my drawings and hand made paper.  It’s three days later and the memory still makes me smile, it’s one that always will. 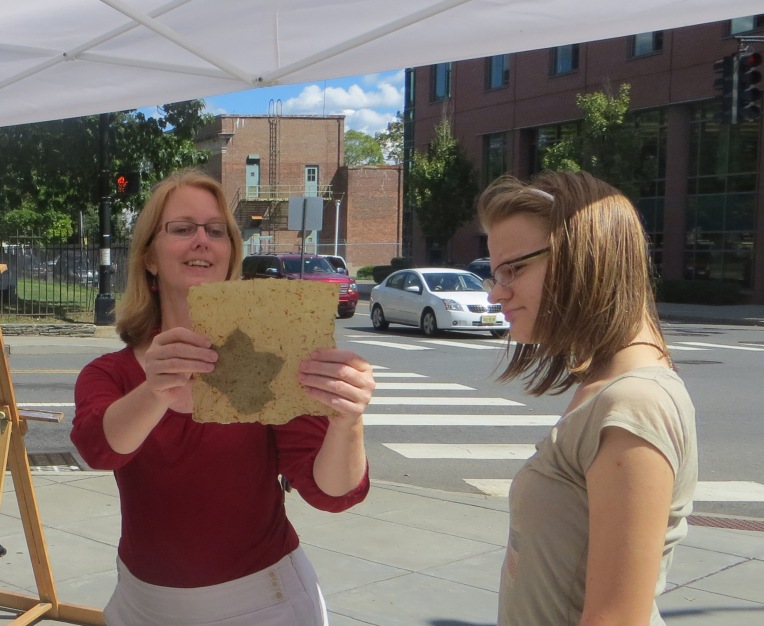 While I was busy making paper, Kathy was equally if not busier demonstrating mono print making. (that’s my next class – can’t wait!)

Kathy is an amazing artist and beautiful teacher.  Her enthusiasm is contagious.  Both kids and adults were drawn to her table like magnets.  They couldn’t wait to see how the painting that started with a bunch of bubble wrap would turn into a piece of art.

She’s all about hands on involvement and having fun.  The picture of six child size hands next to one adult teaching hand pressing the next layer of ink on the print was priceless. 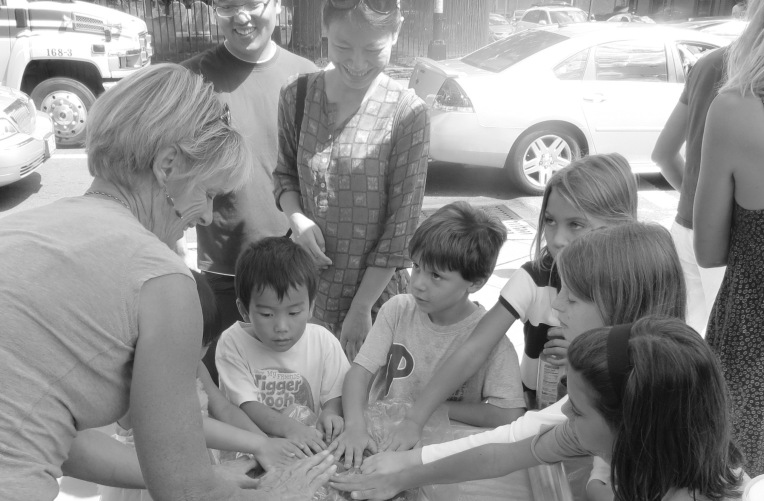 In the midst of it all, I found a quick moment to take a picture of our guests on stilts and the lonely but hopeful young man who had just moved to Princeton from Montreal the previous day.  I wanted to take a picture of the tall young Caucasian guy wearing an orange sarong and a yellow tunic, but that seemed rude.

Before we knew it it was almost 5 pm and although people were still stopping by, it was time to clean up.

It was a day to remember, and one I would have ever imagined, not in a million years.

7 thoughts on “Never in a Million Years”