I had a very special Christmas this year.  Jeff and Katie, my two oldest kids, were both able to get the same days off over the holiday.  They both flew in on the 21st of December and we had until the 27th to enjoy being together.

I’m getting pretty creative these days when it comes to travel, and I’ve become a huge fan of taking the train any time I can.  Jeff and Katie both agreed to take the train from the airport (I really didn’t give them much of a choice). This meant that instead of trying to coordinate arrival times, airports, and costs for flights from two different cities I could focus on getting the best fare.

Things went smoothly aside from a couple of flight delays and a train stop due to a police  check and they were both here by 3 P.M.  We kicked off the weekend with a night of food and laughter with friends.

Dan, Brian, Paul, and Mary arrived on Saturday evening bearing gifts and board games.  We played Say Anything before dinner and laughed until we almost cried.  We played another game after dinner and wrapped up the evening with hugs.

We had a traditional Christmas Eve;  and although the minister attempted to draw an analogy between the movie Elf and Buddy’s use of maple syrup to the joy of Christmas, the church service was very nice.

Posing for the obligatory Christmas Eve family picture took a little more time than usual this year but in the end we decided it was worth it. 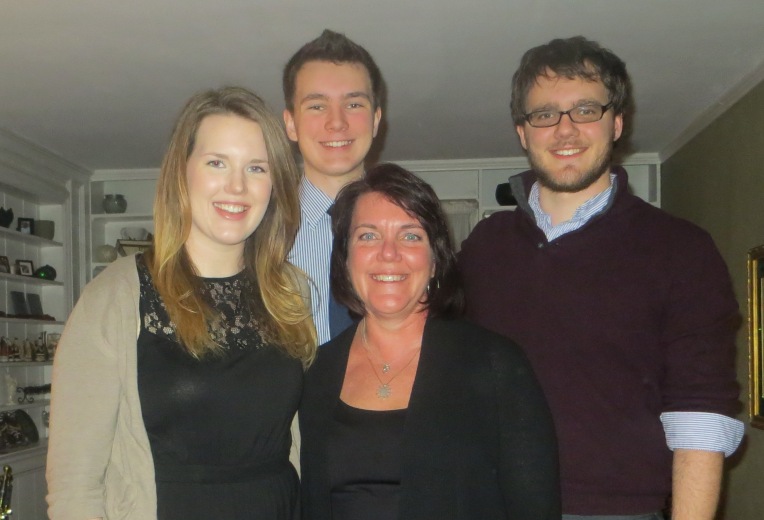 One of the things I love most about my kids is that they love being ‘kids’ they are never ‘too cool’ to be goofy and have fun together.

We packed in as much as we could during the week and in addition to seeing the Hobbit and Le Miz, we spent a cold and rainy afternoon in NYC.

I think it’s a good thing that we didn’t check the forecast before we left or we might have decided to stay home instead of dodging icy raindrops so we could say we’ve seen the Christmas tree at Rockefeller Plaza.

I think we stayed just long enough to flag down a couple of random strangers to take our picture before we hailed a cab.  Which by they way, was the best $11.00 I’ve ever spent.

Thursday was the return travel day and filled with shuttling the kids to their destinations. I dropped Jeff off and fought back the goodbye tears until I was home.

Christian looked up when I walked in the door, “It’s so quiet.”

“I know, it’s funny how even when everyone is here, even when it’s quiet it feels like it’s not,” I said.

There’s a sound that is more quiet than quiet, and that’s the silent echo that bounces off the walls after a week with all of my kids.  In some ways I think it’s a sound of love.

5 thoughts on “What is More Quiet Than Quiet?”