I remember the conversation like it was yesterday. My Ex and I had been looking for a dog for a few months, with the help of his mom. She was very active in animal rescue and adoption efforts and passed along leads to us as they came her way.

“A miniature dachshund?! How much smaller can a dachshund get?”

I dashed downstairs to the computer and Googled “miniature dachshund,” printed out pictures of half a dozen cuties, and ran to the top of the steps holding the pictures up and singing, “see how cute they are!”

Although he was skeptical, Eric agreed to go meet Annie, a beautiful auburn mini-dachshund with a heart shaped spot on her tail. I don’t think it’ an exaggeration to say it was love at first sight.

A few months later we decided to surprise the kids with a pal for Annie. Romeo, a handsome dapple joined our family as a Christmas puppy. From the very first day we brought him home, Annie and Romeo were inseparable. 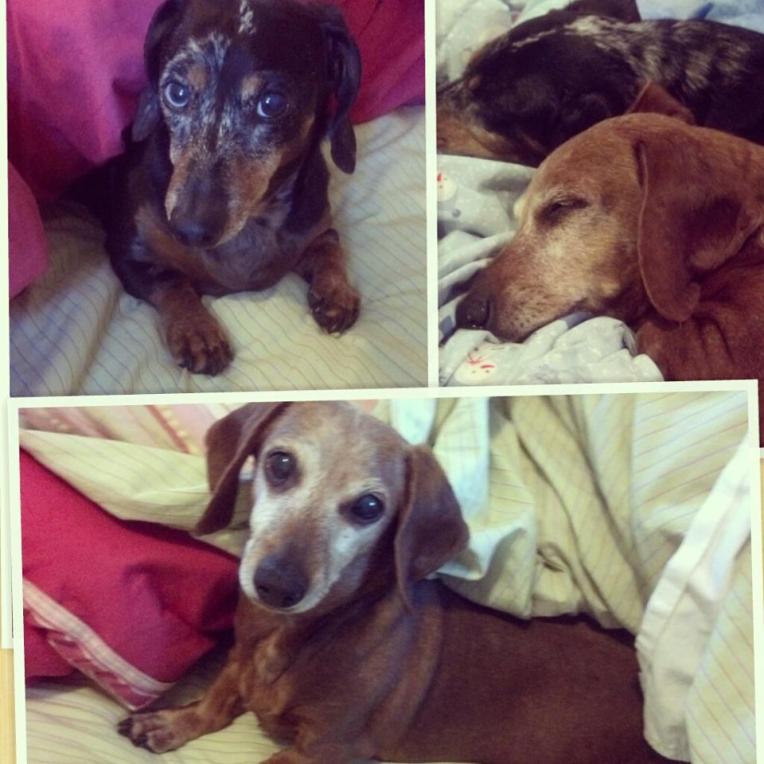 You may be wondering why we didn’t call them Romeo and Juliet. Annie was already well over a year when we adopted her and over two by the time Romeo came along, so it didn’t seem right to change her name. Besides, we’d already assigned her several nicknames like, Anna, Anabelle, Belly, and Bellerbee and who wants to start learning a new name let alone a bunch of alternates ;)?

Romeo was a compromise for Oreo, which Katie had set her heart on for his name. We all have a different memory about how the name Romeo came to be the choice, but we all remember Katie being adamant about The name Oreo.

They loved long walks in the park, digging holes, and chasing squirrels. Back in the day when people used to thaw meat outside in the sun without worrying about food poisoning, Annie managed to leap frog onto the patio table via a chair and consumed an entire package of pork chops. Pork Chop Annie was quickly added to her long list of nicknames.

Romeo was known as Mo Mo, Me mo, Mobert, and Moby to name a few. I generally referred to them as a pair, they were my “dudes.” The dudes spent many hours chasing each other around the legs of the table, scurrying under one end of the sofa and reappearing on the other end, and slipping and sliding on the hardwood floors. Any toy with a “squeaker” became squeakerless within the first few seconds of receipt.

The winter before last, Annie’s age began to catch up with her. Stairs became more than she could manage and Christian and I shared more than a few tearful nights wondering how long she would be with us. I was thankful that she defied my prediction and came back just as scrappy and sassy as ever.

Last spring I thought the “time had come” again; Jeff and Katie even made a special trip over Memorial weekend to say farewell. Little did we know that things would turn out quite differently than we thought.

An injury and old age took Romeo from us unexpectedly in August. He was a proud boy who chased squirrels and hunted for rabbits every chance he got. He stood guard fearlessly before a storm, but had an unusual fear of flies that would send him under the nearest bed or into the closest closet.

Annie loved giving kisses, sitting on laps, and never turned down a tummy rub. Every afternoon at 4 pm, Annie assumed a watchful position on the bottom step, waiting for Christian to come home from school. Her habit didn’t change after he left for college. 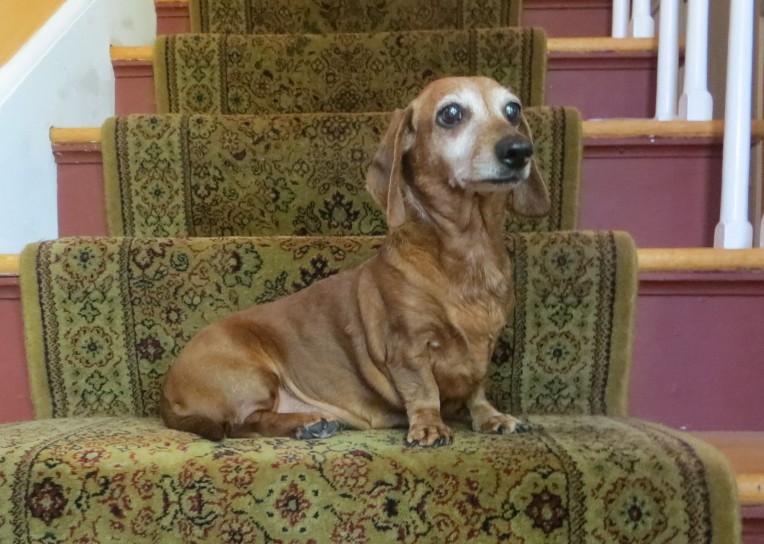 Yesterday, I had to do what every pet owner dreads for the second time in two months.  It was hard, but it was right. The vet was kind and compassionate and reminded me that when one of your “dudes” loses their passion for life and is experiencing discomfort, the kindest thing we can do is say goodbye.

It was a sad day indeed, but I cherish the memories of the joy the pups brought to the lives of my children and I take comfort in the knowledge that Annie and Romeo are once again together.

6 thoughts on “Wasn’t it Just Yesterday?”