July 11th was the second Friday of the month, which for the past four months in my world meant it was time to enjoy another drum circle.

This one was extra special to me because my youngest son and his girlfriend agreed to be my guests. At dinner I did my best to give them a preview so they would know what to expect.

The one and only prediction I knew would come true is that they would be by far the youngest people in the group. Beyond that, each circle creates a unique footprint that becomes a part of each participant’s memory but impossible to recreate.

During my short exposure to drum circles, it’s common for our leader to start the evening with a question. He asks each of us to describe how we feel with one word. The words included perplexed, nervous, anxious, happy, optimistic, flurried, and uncertain.

Stormy weather got in our way in June, but we lucked out in July – and instead of playing our instruments under a roof, our heads were covered by clouds and the only light was the setting sun followed by the rising of a nearly full moon. The sounds of city life were present but unimportant as each of us found and followed a rhythm that was uniquely ours, but also part of the group’s.

It may only be me, but in my mind, together we traveled to distant lands while beating our drums. We became part of a rain forest; alive with chirps, clicks, and the gentle rhythms of nature while each of us played a small hand held instrument. We also learned that almost anything can be used to create a musical sound, including an empty coffee can – as long as it still has its yellow lid. 🙂

The sun set, the moon rose, and the evening ended with a walk along the beach.

Each of us played our own quiet sound, keeping in harmony with the underlying heartbeat that led the group. I have no doubt that others also heard the waves and felt the sand between their toes as we took a moment to imagine and dream.

The evening ended with the same question it started with.

We all used different words to describe feelings of gratitude for the chance to be temporarily transported away from our worries and fears to place where our hearts felt surrounded by peace. 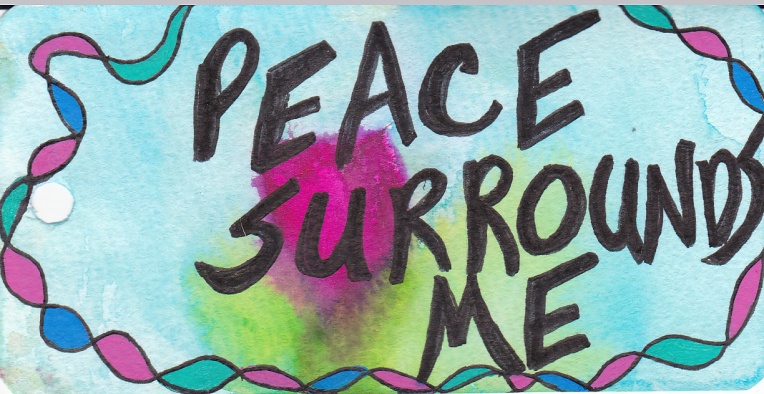 2 thoughts on “Peace Surrounds Me”