My oldest two kids are 1 year, 2 months, and 28 days apart in age and there is a five year difference between my youngest two. I think we started calling Jeff and Katie “the big kids” on the day Christian was born.

When the big kids were deciding on which college to attend we “wisely” advised them to choose a school that was within driving distance and not more than one plane ride away from Omaha. A seemingly brilliant approach to minimize travel expenses and ensure that we’d get to see them more than once a year.

Shortly after Jeff’s second semester of college in St. Louis I accepted a position with a company in Bristol, PA and began a 7 month commute between the Midwest and the East Coast. We physically moved our belongings to our new home the weekend after helping Katie move into her dorm room in Chicago.

They both successfully completed their degrees and landed jobs in their respective cities right out of school and so for the past six years we’ve lived more than double the distance apart from each other than I had anticipated. Circumstances over the past four years have left Christian and me with a lot of together time and unfortunately time and resources to spend individual time with Jeff and Katie haven’t been available.

A couple of weeks ago, I had the special opportunity to spend a week at my favorite place on earth with the “big kids.” Christian just started a new job and had to stay home so he could go to training. It was strange not having all three kids with me, and we definitely missed Chris, but it was also fun to have some time alone with Jeff and Katie.

Getting to Northern Minnesota is no small feat. I flew from Philly to Chicago and spent the afternoon writing in the cutest coffee shop ever while I waited for Katie to get home from work. 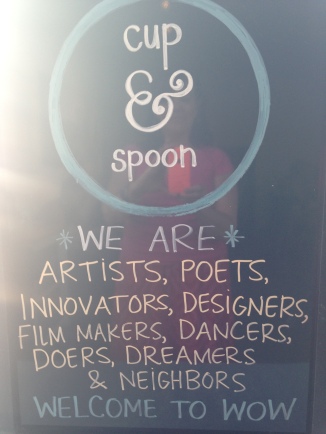 Thankfully she conquered the spaghetti squash without a trip to the emergency room and we feasted on a delicious lasagna dish for dinner.

Jeff arrived from St. Louis around 10 pm and we spent some time chatting and fine-tuning logistics for the 12 hour drive the following day.

I didn’t sleep a wink that night, most likely because of the three large glasses of tea I consumed late in the afternoon. I was super happy to learn that we could put Katie on the rental car as an extra driver so I could curl up in the back seat and snooze.

The lake was gorgeous and perfect for water-skiing. Jeff and Katie had their swimsuits on and were in the lake before their duffle bags were unpacked. 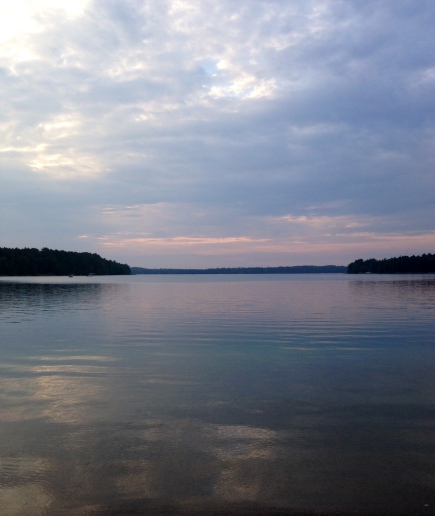 They each got in a high speed tour around the lake just before the sky turned dark and ominous. 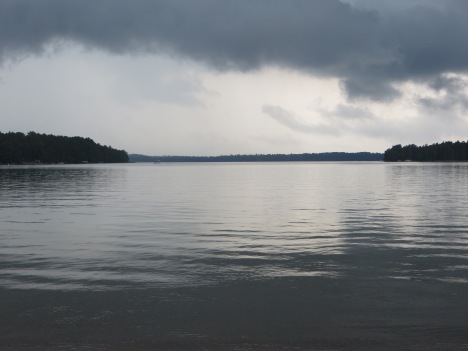 The first few days were windy and a little on the cool side, so we entertained ourselves with trips to the local farmers market stands, the local candy store, and a variety of shops. 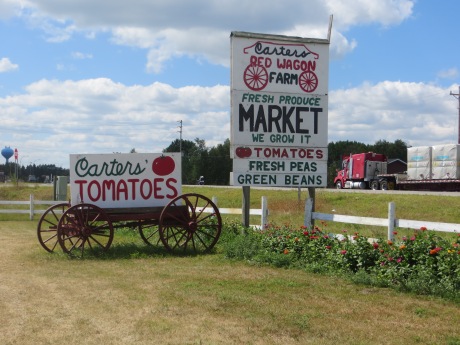 We read books, took naps, and ended the day with a round of cards. 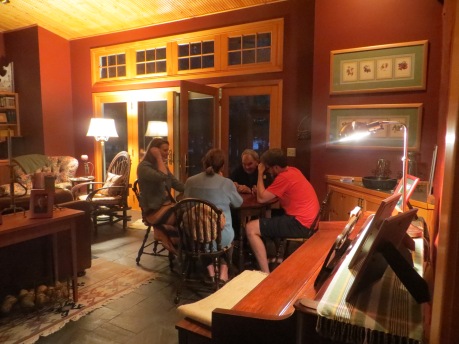 The rest of the week flew by filled with kayaking excursions and pontoon rides. 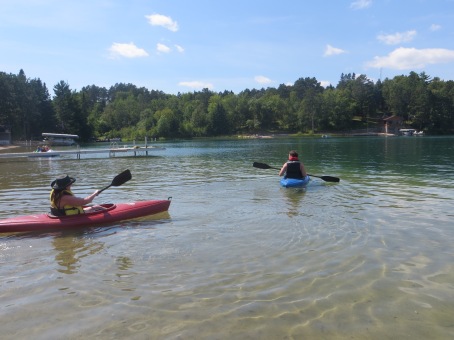 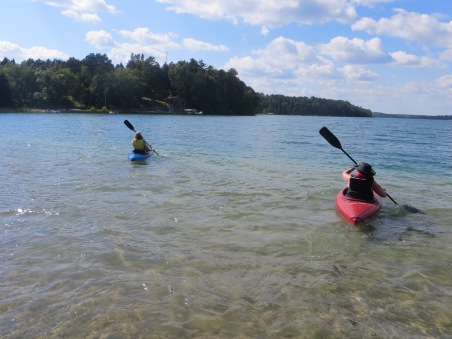 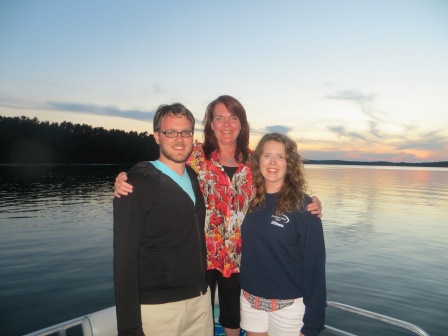 The pontoon is my favorite place to take pictures from. I could spend hours touring the lake at a leisurely pace while watching the clouds change in shape and color. 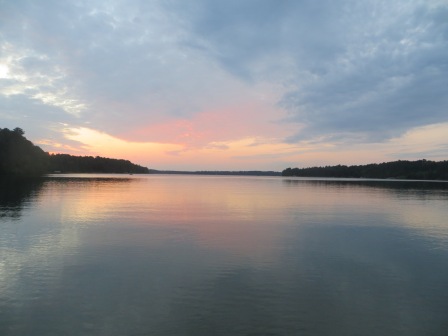 My brother and his family arrived mid-week and we finished out our vacation with lots of beach time and even a late-night girls only swim under the stars. 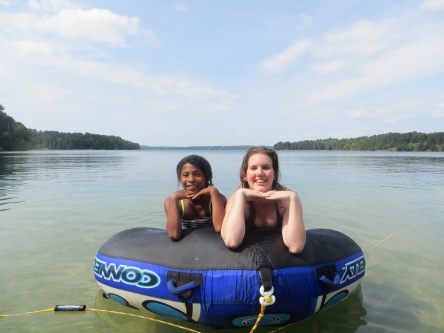 One of our all time favorite activities is to attend the performance at the Woodtick, a small theater in Akeley, MN. It’s a musical variety show with local musicians and it’s a hoot!  There’s lots of campy humor and hand-clapping music.

The music ranges from Irish Ballads to silly songs to modern day hits and some good “ole timey” tunes as well.

Northern Minnesota is the land of Paul Bunyan and Babe the Blue Ox. Across the street from the theater is the largest statue of Paul in the area, maybe even in the world. 😉

It’s a family tradition to take pictures in front of the statue before the performance. This year a nearby stranger offered to take the picture of the group. It’s not often that they turn out all that well, but I think this one did! 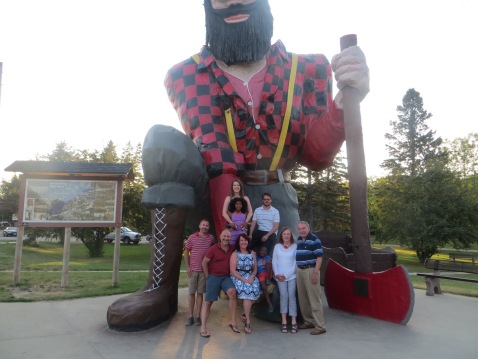 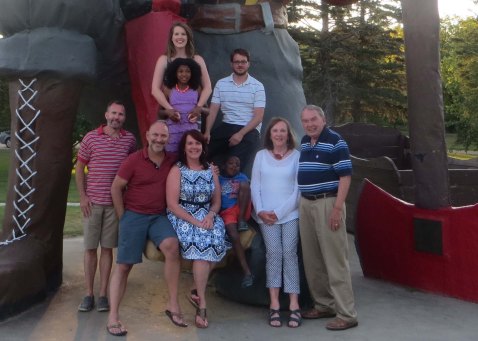 The week flew by far too quickly and before we knew it, the big kids and I were facing our 12 hour drive back to Chicago. I opted not to drive and instead spent the majority of the trip finishing an ink drawing I’ve been working on. (talk about role reversal. 🙂 ) 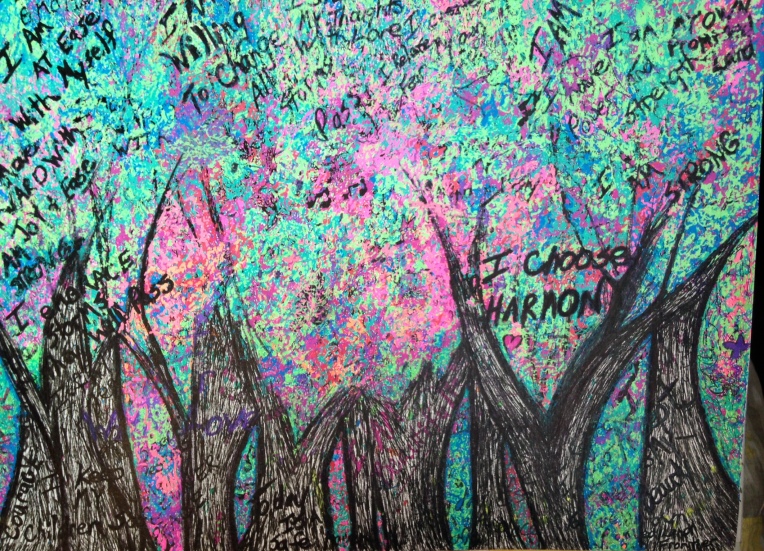 Now it’s back to reality and fall is just around the corner.