“I’ve suffered a great number of catastrophes in my life, most of which have never happened.” ~ Mark Twain

There have been times in my life when I feel like I’ve jumped out of the frying pan into the fire, in other words – moved from one difficult situation to one even worse.

What I’ve learned from these times is that nothing is certain, except that there will always be change, and that sometimes being in the fire – dancing through the flames – serves to make me stronger.

Last weekend, I walked through fire. Not just metaphorically, I literally (yes, this is an appropriate time to use this word) walked across a bed of hot coals. It was an unbelievable experience.

There’s no part of me that woke up last Friday morning and thought, hmmmm…tonight I’m going to walk across a bed of hot coals.

I don’t have any pictures of it. My phone and camera were safely tucked away in my room, and for some reason I resisted the urge to run to the elevator and collect the technology that might help me capture the moment.

Thankfully, a few people did capture the moment and were willing to share it.

The woman in the picture isn’t me, but it could be.

The first time I walked across the bed of hot coals, I was simply carried by the energy of the group. It wasn’t without intention, but it wasn’t specific to me.

The second time I stood in front of the path of burning embers, I raised my hands above my head and shouted “Abundance!” I heard two hundred voices echo my intent as I crossed the fiery pit.

The path to Abundance is paved with challenges, it won’t be easy – but it will be worth it.

The key is to live each day without making up what tomorrow will bring and accepting that the only thing that is certain is change.

We’ve all heard the expression, “it’s darkest just before dawn,” or some variation of it. I didn’t realize until today that it’s actually a proverb, first committed to print by the English theologian and historian Thomas Fuller in his religious travelogue A Pisgah-Sight Of Palestine And The Confines Thereof, 1650, citing this view:”It is always darkest just before the Day dawneth.”

It can be viewed as an annoying cliche’ or bromide that people use to offer comfort and hope to someone who is going through a tough time, or as a truism that really should offer us hope. For me, it’s a little of both and it’s right up there “it is what it is,” “everything happens for a reason,” and “what doesn’t kill you makes you stronger.”

I’ve come to believe that there’s something else that happens just before the metaphorical “dawn.” We become quiet and still and our needs are met in unexpected and often-times wonderful ways. We tend to think about how being still and asking for help apply only when it comes to major things happening in our life, but miracles small and large are happening all around us every day.

A few months ago I was traveling for business.  Normally I make my own travel arrangements, but in this case the company I was visiting took care of the planning and booking of airline tickets, limo transportation and the hotel. My area airport of choice is in Philadelphia, but because I was traveling the weekend the Pope was leaving NYC and headed to Philly, I flew out of Newark to avoid the crowds and potential travel delays. I made it to the airport without getting lost, boarded on time,

had a smooth flight, a ride in a limo and stayed in a beautiful hotel. The following day was filled with productive back to back meetings and conversations. Around 3 o’clock in the afternoon, my  much needed break was interrupted by news that my return flight to Newark had been cancelled but new arrangements had been made.

The updated travel plans meant cutting my day shorter than planned but it also meant I’d be home before midnight (or so I thought).

I said my farewells and was whisked away in the limo,

rode in style to the airport and zipped through security with my TSA pre-check boarding passes in hand. Half-way through the first flight to Chicago I decided to check the boarding pass for my connecting flight into Newark.

Much to my dismay and borderline horror, my next flight was headed to JFK in New York City, not to Newark, New Jersey. How could this happen you ask? So did I! It never dawned on me to look at the flight details other than the times – after all why would someone book a return flight into a different city than the originating flight?

My best guess is that one of two things happened – one theory is that whoever made the original reservations said Newark really fast and the person who made the revised arrangements either heard New York or they’ve never heard of Newark. The other theory is that they looked and found that Newark is “only” thirty miles from JFK and it would be easy to get from one airport to the other.

My heart pounded against my chest and I wouldn’t want to know what my blood pressure was in that moment.

One thing I knew was clear, I had no choice but to board the plane in Chicago and figure things out from there.

In addition to highlights of the Pope’s visit to NYC, the news was also filled with updates about modified train schedules and street closings throughout the city so I knew my options could be limited. The first thought I wrote in my journal was, “If I can get a cab for less than $100, I’m going for it.”

The nice young man sitting next to me tried to help by pulling out his app with the NYC subway schedules, “You could take the X line to the Y line and then hop on the Z line and maybe make it to Penn Station before the last train leaves. Of course I don’t know for sure if they’re running on schedule because of the Pope’s visit.”

Thoughtful as he was trying to be, his assistance only conjured up images of myself spending the night at Penn Station with a colorful cast of characters from NYC nightlife.

I asked the flight attendants about cab fare. “You’re looking at a minimum of a $200 cab fare; your better option is to take the airport bus from JFK to Newark, it’ll cost you about $30.”

A $30 bus ride was totally reasonable and sounded like an easy solution to my dilemma. For the rest of the flight, my heart was still and the worries were put aside.

As explained, the booth to buy tickets for the bus between airports was at the bottom of the escalator. The sign said it closed at 10:30 pm, I looked at my watch – it was 10:32 pm. Not one to give up, I approached the man at the booth and asked if I could still buy a ticket to Newark.

“We can hold the bus for 5 more minutes, so you’ll have to decide fast.”

I pulled out my wallet to pay and asked, “Does the bus go directly from here to Newark?”

“No, normally you get on this bus and it goes to the Port Authority parking lot where you would get on another bus, but since the Pope is in town, that area is blocked off and so you’ll need to walk 12 blocks to meet up with the connecting bus that will take you to Newark.”

Schlepping my suitcase for 12 city blocks alone, at night, in NYC did not seem like a very appealing idea.

“Excuse me, I couldn’t help but overhear your conversation,” said the man who had arrived at the booth a few minutes before me. “I’m in the same situation, if I can find us a cab would you want to split the fare with my daughter and me?”

He didn’t need to ask me twice.

This kind stranger negotiated a fare that cost me $80 plus tip.

When we are facing a problem, sometimes a peace and quiet comes over us because we think the problem has been solved and we know what the solution is. Other times we become quiet and still because we “give up” and make a conscious choice to quit trying to chase after the solution and control the outcome.

In those moments of  quiet and letting go, miracles happen.

In 2011 I was gifted an opportunity to learn from Julia Cameron, author of “Walking in this World”  which led to a series of personal essays in which I did my best to share what I learned along the way about life and the art of “being.”

In 2014 I discovered the teachings of Louise Hay through the movie adaptation of her book “You Can Heal Your Life.” Intrigued by her belief that much of the pain we experience in our bodies is a result of negative experiences and self-perceptions, I bought the book and embarked on another creative journey. One that involved 125 days of consecutive writing and visual art. As a result, I created my tiny but powerful journal entitled All is Well in My World.

Looking back, I wish I had posted each entry on my blog instead of on Google Plus, but thankfully the entire series of mini essays, observations and illustrations is safe and saved in a word document. Who knows, I might actually do something with them some day. 🙂

I have no idea if Julia Cameron and Louise Hay have ever met each other, but I do know that in my world, the two of them have and they both taught me to understand and believe that life is a gift. 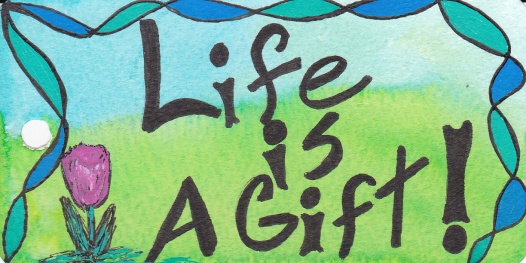 Maybe more, or at least as importantly, their teachings helped me begin to understand that we have far more influence over what happens in our life than most of us believe we do.

Which brings me to my latest “project.” I recently purchased and am reading “Angels of Abundance” By Doreen Virtue and Grant Virtue – I don’t really know how to describe it other than to say it’s a spiritual guide, that if read with an open mind and heart teaches how each of us has the ability to manifest and co-create an abundant life through believing in a Higher Power and also in ourselves.

As often-times happens, one thing led to another and as I pursued the works cited in their book I kept coming back to one in particular – Miracles Now: 108 Life-Changing Tools for Less Stress, More Flow and Finding Your True Purpose” by Gabrielle Bernstein.

Coincidentally (or not), I recently replenished my supply of  Peerless Watercolor sheets and started a new art journal with no direction in mind other than I wanted it to be something positive. It’s all leading me toward another series of self expression through art and writing.

I created my first related journal entry today, the first tool in the Miracles Now book was the inspiration.

Happiness is truly a choice. I can’t honestly say that I have always believed that, but I do now.

Choosing happiness isn’t about never feeling frustration, anger, sadness or fear – those are real emotions and they need to be experienced and felt. Choosing happiness means not letting those feelings rule our lives.

Happiness is now a choice I consciously make.